~Know before you go!

Wanna hear what other people are saying? Here are a couple places we’ve turned up in the last couple years:

Located four miles deep in Truckee’s Coldstream Canyon and accessible via rugged dirt roads, Lost Trail isn’t so much a hut as it is a deluxe off-the-grid lodge, with a chef’s kitchen, four bedrooms, and Jacuzzi tubs (from $230). There’s no cell service, and electricity comes from solar panels and a generator, but there is a bike tuning station and access to stellar trails like Yogi Bear, BooBoo’s, and JP’s, each featuring purpose-built singletrack with stellar climbs and descents.

23 Cozy Winter Lodges: It takes a 4-mile trek on cross-country skis, amid endless Sierra views, to reach this mellow backcountry lodge. Your reward: a stove-heated room—one of four in the lodge (there’s a bathroom-less cabin too)—and a veritable Americana museum to browse post-sledding. From $230/person; 2-night minimum; losttraillodge.com

Hard to Find, Easy to Love 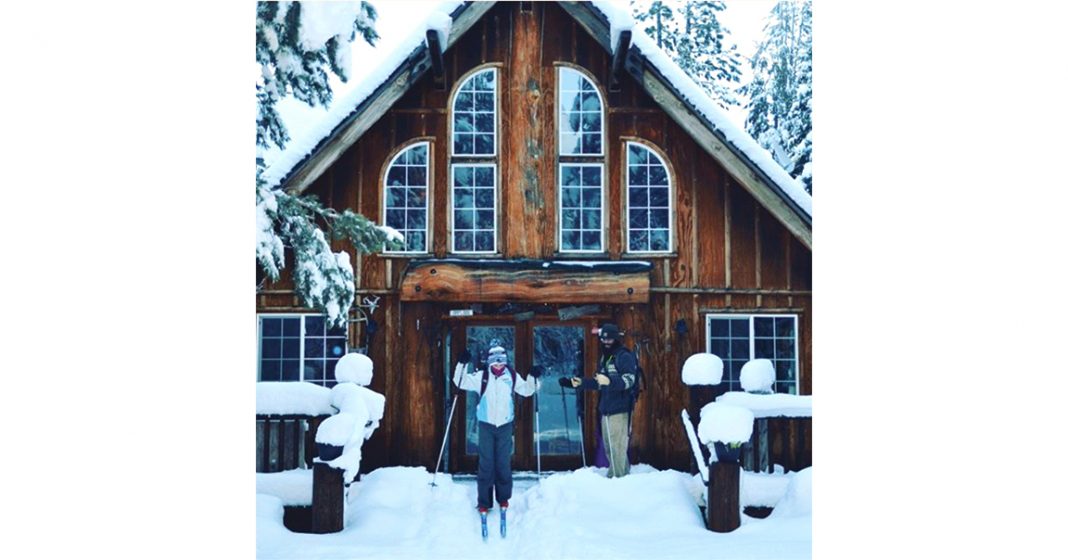 It’s hidden, but clearly on the map. It’s in town, but the commute isn’t easy.

Snugly tucked into Coldstream Canyon between branches of its namesake creek, the quirky, inviting Lost Trail Lodge is a woodsy escape route from Safeway lines and chain control backups, giving guests no shortage of reasons to ask for a late checkout.

When winter cooperates, owners Lindsey and Tony Nieman (Lindsey’s parents built the lodge) occasionally run a snowcat to the mouth of the canyon on Cold Stream Road to portage guests’ luggage. However, the 3.9 miles to check-in are up to you.

Any mode of over-snow travel gets you there, but with coveted backcountry lines dropping from surrounding ridges, alpine touring setups and splitboards are a common sight along the lodge’s porch rails.

Lost Trail Lodge is part hotel, part alpine refugio. The four rooms, three of which can sleep four adults and one sleeping six, are separate with full private bathrooms. Group reservations are available, and common.

The shared kitchen, with a Wolf range, refrigerator, and cast-iron cooking essentials, is ready for dawn-patrol breakfasts and aprés ski hors d’oeuvres. It’s designed to bring people together, however, guests looking for privacy are encouraged to seek it, too.

Delightfully cluttered in a theme best described as contemporary pioneer, the living room is adorned in pelts and locally sourced river rock.

A throbbing wood stove beats warmth, and a menagerie of local artifacts, vintage outdoor gear, books, and countless other reasons to keep a smartphone in airplane mode, color the spirit of the lodge. Bring your mukluks, and hope someone knows how to play the piano.

Lost Trail Lodge isn’t formal or exclusive. Expect to be known among strangers, and to fill a spot on the shotski. It’s not a big place, but feels wide open.

Mentioned in The New York Times, Sunset Magazine, and other travel resources, Lost Trail Lodge is one of Truckee’s most least-talked-about winter quick trips, because those who know about it would prefer others don’t.

Prefer summer? Miles of well-regarded mountain bike trails stream from the lodge’s front porch and a somewhat covert but highly-rated granite crag awaits in-the-know climbers. Oh, and every room includes a dog bed — as if you needed another reason to go get lost. Visit losttraillodge.com for booking and information.

Backcountry Bikes and Bluegrass at the Lost Trail Lodge

As I meandered down the dusty road, I slowly, almost imperceptibly, heard string music floating between the trees in the distance. Was it just my imagination playing forest tricks on me again? Or were the sprites and pixies singing lullabies to the midsummer sky?

The beckoning jangle drifted in out of my perception, yet I couldn’t tell from which way was it was coming. A little further up the road, civilization appeared in the form of a rugged, back-country lodge rising from the dense woods.

As I passed the driveway, two mountain bikers zoomed by just back from their morning ride up Snagglepuss, dirty smiles pasted on their faces like little kids up to no good.

Around the corner of Lost Trail Lodge, I found around 60 local folks hanging out underneath the canopy listening to a tie-dyed group of bearded gray hairs picking out an old Jerry Garcia tune on various acoustic instruments. Even though it wasn’t the long lost Sierra nymphs of whom I’d dreamt, it could’ve been; the magic of music belonged there just so.

Soon a trio of women took the stage with ukuleles in their hands. You could feel the life stories emanate between them as they sang their simple versions of classic Americana tunes, a soft, cool breeze fluttering through the trees beneath a wispy sky of blue.

The audience nibbled on fresh watermelon and sipped on beers as their children wandered around the wood-chipped yard, clambering on fallen logs and searching for nebulous insects. The shade of pine and fir offered a nice respite from the high heat of Tahoe summer.

The sound of soft, intimate chatter and honest conversation between kinfolk wafted between the heart-plucked tones on stage. I almost felt as if I’d been transported back to simpler time gone by.

Through the backstage door beyond the musicians is the lodge itself, built two decades ago by the unknowable David Robertson.

“It was a Home Depot kit,” he says sarcastically before running away through the trees beyond a question’s reach.

Inside, the rooms are full of antique knickknacks ranging from old area maps and leather-bound snowshoes to oil lanterns and wooden skis. Upstairs in the kitchen, I find a quiet moment to speak with the lodge’s caretakers, Tony and Lindsey Nieman.

They’ve lived out here for the past eight years while raising their daughter Kiely, 12, and son, Shepard, 4. The first season they moved in was during the record winter of 2010-11. Robertson, who is Lindsey’s father, had picked a good year to head to Hawaii for the season.

“By the time he got back, we were still buried,” says Tony with a knowing smile to his wife. “The good thing was we liked it here and, more importantly, we still liked each other, so we stayed. We figured if we could make it through that winter, then we’ve got this nailed.”

The couple now earns a living renting the lodge to back-country skiers, Pacific Crest Trailthrough-hikers, wedding celebrants and others for special events.

While they held several bluegrass gatherings early in their tenure, they had decided to hold off after seeing the impact it was having on the surrounding forest. One time nearly 300 folks made the trek up the rocky, four-wheel-drive Cold Stream Road to the Pacific Union train tracks. They all had to hike another half mile to reach the lodge.

“At one point, it seemed like it had outgrown us,” says Tony. “But as the years went by, people kept asking about it.”

This summer the lodge is hosting three Backcountry Bikes and Bluegrass events as fundraisers. The first was on July 21. Aug. 18 will feature the Lost Trail Front Porch Hot Mamas and High Strung and will benefit Friends of Yogi Bear. The event on Sept. 8 will feature The Reno Ceilidh Band and will benefit Tahoe Nordic Search and Rescue. At 11 a.m. there’s a bike ride from the summer parking lot. From 12:30 to 3 p.m., there’s free music at the lodge; bring a picnic basket. They will be asking for donations for the local organizations.

“We decided it was time to bring it back because it makes people’s hearts happy,” says Lindsey. “This place is special because it allows people to come together in a secluded, intimate environment.”

“When you hike out here and earn it, especially in the winter, this is the holy grail,” says Tony. “There’s a warm bed, a home-cooked meal and a hearty fire burning. There’s no phone reception so most people leave it in the car. Even in Tahoe, it’s hard to really get away from it all these days. People are surprised this is here. And it requires just the right amount of effort.” | (530) 320-9268, losttraillodge.com

If you’re lucky enough have good local knowledge in Tahoe, he’ll know just the place for a couple days of backcountry fun for you and 15 of your closest ski buddies. That would be funky/rustic Lost Trail Lodge, a four-mile skin up the Cold Creek drainage just outside Truckee, Calif.

If your local knowledge—in this case, Tecnica Blizzard super rep Clem Smith—happens to have a killer carbonara recipe, handed down from the international product development director’s dear Italian nona, that’d be even better. (The secret: lots of nutmeg.)

If the people you were hanging out with happened to be a fun gang of ski industry professionals, including four fun and capable guides plus ski-film icon and “Squallywood” author Robb Gaffney, you’d feel like staying for at least another day.

Throw in killer margs, stupid party games, and awesome corn and powder runs in the high Sierra, and it’s an unbeatable trip.

Ready to earn some turns? Whether you’re a self-guided veteran or newbie with guide, Lost Trail Lodge makes for a fun, comfortable base.

Lost and Found; How One Family Found Home Off the Grid in the Sierra

Gear rentals
Don’t have your own stuff? No worries! These guys have you covered.

New to the backcountry? Have plenty of experience, but want someone with local knowledge to show you around? These places are a great place to start

If you’re looking for a pampered experience, ask these chefs to come cook for you. They’ve been here before, and know the drill. AND, their food happens to be amazing

Like to climb, hike, bike, ski? So do these guys!